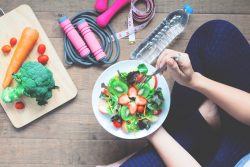 A new study at the University of Exeter has discovered another good reason to live a healthy lifestyle! The research found that in people with a high genetic risk for developing dementia the risk was 32 percent lower if they followed a healthy lifestyle.

This study was the first to analyze to what extent a person might offset their genetic risk of developing dementia when living a healthy lifestyle. The findings show that when a person takes action to do their best to offset the risk by living healthy, they can make a difference regardless of the genetic risk.

The study included analyzed data from 196,383 adults aged 60 and older and of European ancestry. The research team identified 1,769 cases of dementia during the follow up period of eight years. The study team grouped all participants into three groups…those with low genetic risk, intermediate genetic risk and high risk.

The study team discovered that living a healthy lifestyle was linked to a reduced dementia risk across all the genetic risk groups. The team reports that their research delivers a very important message that undermines the fatalistic views of dementia. Many people believe that developing dementia is inevitable due to their genetics. However, because of this new study, it appears people may be able to substantially reduce their risk of development the disease through healthy lifestyle habits.

Association of Lifestyle and Genetic Risk With Incidence of Dementia