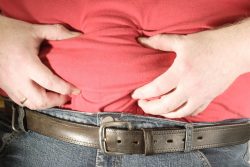 According to a new study led by Sylvia Santosa at Concordia University’s Faculty of Arts and Sciences, the mechanisms by which aging and obesity develop are very similar. The team believes that obesity should now be considered premature aging because it predisposes people to acquiring potentially life altering diseases which are normally seen in older people.

Around the world there are an estimated 1.9 billion adults and 380 million children who are either obese or overweight. The World Health Organization says more people are actually dying from overweight than underweight.

With the goal of trying to comprehensively show that obesity parallels aging, the team reviewed more than 200 papers which looked at obesity’s effects and how obesity ages the body from a variety of perspectives. They looked at the immune system to shifts in tissue and body composition, and the processes of cell death and the ongoing maintenance of healthy cells that are typically associated with aging.

The team notes that at the lowest levels inside the human body, obesity is a factor that directly speeds up aging mechanisms. At the genetic level, the team discovered that obesity influences a number of alterations generally associated with aging. These include the shortening of telomeres which are the protective caps found on the ends of chromosomes. Telomeres in people who are obese can be more than 25% shorter than those seen in control patients.

The study has also suggested that obesity’s effects on mobility, cognitive decline, stress, and hypertension are all similar to those of aging. From the cellular level, the team says obesity plays a significant role in the body’s defenses against age related diseases. Obesity will speed up the aging of the immune system through targeting different immune cells and that later weight loss will not always reverse this process.

The hope is that these observations will focus approaches to understanding obesity in a better way and also allow people to think about obesity in a different way.

Obesity and ageing: Two sides of the same coin.