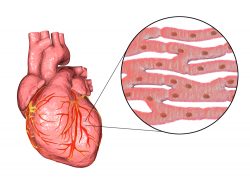 A team has reported new technology that will not only repair heart muscle cells in mice, but also can regenerate them after a heart attack. The groundbreaking discovery has the possibility to develop into an important clinical strategy to treat humans who have heart disease.

The brand new technology was developed by researchers using the synthetic messenger ribonucleuic Acid (mRNA) to send mutated transcription factors into mouse hearts. These are proteins that execute the conversion of DNA into RNA. This is the first time this has been done to this degree in research and it has the potential to be a treatment for people.

The team used 2 mutated transcription factors – Stemin and YAP5SA. They worked together to boost the reproduction of heart muscle cells that were isolated from the hearts of mice. The experiments were performed in vitro on dishes of tissue culture.

What they were looking to do was dedifferentiate the cadiomyocyte into a stem cell like existence so that they were able to proliferate and regenerate.

Stemin will turn on properties that are stem like from cardiomyocytes. The discovery of Stemin’s most critical role in the experiments by one of the researchers says the transcription factor is a change in the game. YAP5SA works through promoting growth of organs that will cause the myocytes to copy even more.

From a different discovery the researchers determined that Stemin and YAPS5A repair damage to the hearts in the mice in vivo. Myocyte nuclei reproduced, at minimal, 15 fold in the 24 hour period after heart injections delivered the transcription factors.

When they injected the two transcription factors into infarcted adult mice hearts, the outcome was amazing. The lab discovered myocytes multiplied fast within a day’s time, while hearts over the following month were repaired to an almost normal cardiac function of pumping without much scarring.

An additional benefit of utilizing mRNA, is that it will disappear quickly in comparison to viral delivery. When gene therapies are delivered to cells by viral vectors it raises a variety of biosafety concerns due to they cannot be stopped. Delivery by mRNA turns over quickly and then disappears.

The study is huge in heart regeneration because of the smart strategy of using mRNA to deliver Stemin and YAP5SA. The discovery is particularly important due to less than 1% of adult muscle cells are able to regenerate. Almost all people will die with most of the cardiomyocytes from the first month of life. Following a heart attack the muscle cells of the heart die, and the contracting ability of the heart could be lost.

Should You Brush or Floss First?