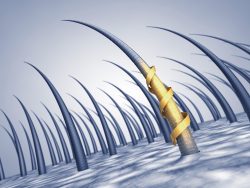 Hair follicle cells divide and die. But a new study has discovered a single chemical called TGF-beta that determines when this happens. It could ultimately treat baldness and may speed wound healing. Since follicles are a stem cell source they have the unique capability to be able to turn into other types of cells. This stem cell adaptability creates a path for repair of tissues and organs that have been damaged.

Hair follicles are the one organ in the human body that automatically regenerate periodically without injury. Therefore, this was the ideal organ for the research team to study. They determined how TGF-beta, which is a type of protein, controls the division of hair follicles or orchestrates its death.

TGF-beta has two roles at play in the hair follicle. The first role is to divide and produce new life in the hair follicle and the second is that it helps orchestrate cell death. The team found that the amount of this chemical is what makes the difference in life or death of the hair follicle. A certain amount and the cell divides, but too much and it causes apoptosis, or death.

But the death of a hair follicle does not kill the stem cell reservoir. The cell eventually receives a signal to regenerate and then it divides, makes a new cell and a new follicle is developed. If the scientists can figure out how TGF-beta activates cell division through communicating with other distinct genes, there is the possibility to activate follicle stem cells and stimulate hair growth.

The researchers hope in the future they can precisely determine how the TGF-beta activates the cell to divide. It could potentially lead to a cure of baldness and a variety of other problems.

To view the original scientific study click below:
A probabilistic Boolean model on hair follicle cell fate regulation by TGF-B