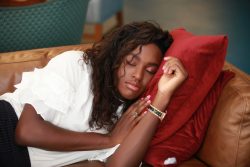 A new study has shown that naps are associated with a lower risk of heart disease. Occasional napping can cut a person’s risk of strokes, heart disease and heart attack by half when compared to those who don’t nap.

The health benefits of napping have been debated for years. Earlier research was inconclusive. Many argue that the studies failed to consider frequency of napping as an important factor.

The research team at the University of California collected data from almost 3,500 randomly selected residents of Lausanne, Switzerland between the ages of 35 and 70. They analyzed the associations between average nap duration and nap frequency effects on the risk of cardiovascular disease over a 5 year period which indicated some interesting trends.

About 58% of the participants did not take naps at all. One in five participants took 1 to 2 occasional naps on a weekly basis and this was associated with a 48% decrease in the risk of a cardiovascular event. One in 5 who were frequent nappers of 3 to 7 naps on a weekly basis, who tended to be male and older, also weighed more, slept longer at night, smoked often, reported more daytime sleepiness and were more likely to have sleep apnea, had a 67% increase in risk of heart disease.

However, when the team took into account lifestyle; cardiovascular risk factors such as age, hours of sleep per night, and disease risks; and sociodemographic, the risk for cardiovascular disease among occasional nappers disappeared.

Initially, frequent napping seemed to increase a person’s risk of heart disease by 67%. That disappeared after taken into account the other factors. This suggests that napping may have a positive impact on cardiovascular disease. Furthermore, no associations with cardiovascular events were found for length of naps – from 5 minutes to 1 hour and more.

The study was observational so it can’t be assumed that napping directly contributed to the decrease risk of heart disease. However, it does contribute to the ongoing debates over health benefits due to napping. Sleep researchers have never completely defined a nap and different cultures look at naps differently. Some sleep researchers say a 20 to 30 minute nap in the early afternoon is the perfect nap.

The study also suggest that might not only be the duration of the naps, but also the frequency that matters. The study of napping is very challenging given it is largely dependent on data. There remains many more questions than answers, however it is time to begin unveiling the power naps may provide for a supercharged heart!

Association of napping with incident cardiovascular events in a prospective cohort study.