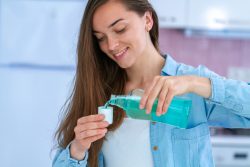 Recent research has speculated that mouthwash may inhibit the spread of SARS-CoV-2 which is the virus responsible for COVID-19. The scientific review has suggested that publicly available mouthwashes may in theory, inhibit this virus.

If clinical trials do prove effective, the findings may provide another method for people to help reduce the spread of the virus while scientists continue to work on producing an effective and publicly available vaccine.

In the meantime, scientists are focused on ways to reduce the rate of infection to more controllable levels which will not overwhelm hospital intensive care units. One area of research has involved disrupting the way in which the virus can take over a cell of a host as it replicates itself.

SARS-CoV-2 like other types of coronaviruses, is an enveloped virus which means it creates an outer membrane through drawing on the cells of a host organism. This membrane will allow the virus to effectively replicate. If scientists can find a way to disrupt this envelope, then it may be possible to slow down the spread of the virus within an organism.

Using a disinfectant or soap and water can disrupt a viral envelope and therefore kill the virus. Research has shown that disinfectants can kill the SARS-CoV-2 virus. This is why the health community has encouraged people to wash their hands and surfaces with alcohol based products or soap on a regular basis.

The current review has proposed that some widely available mouthwashes may also be able to help fulfill the role of killing the virus.

It has been shown that the virus significantly replicates in the throat. This means that a patient with the virus is likely to have the highest concentration of the virus within this area. And with these high levels of the virus in the throat, it is easy for someone to transmit the virus through coughing, sneezing, and breathing.

Previous research into alcohol’s ability to disrupt the virus envelope has mainly focused on products with a high alcohol content of between 60% and 70%. This is due to manufacturers who typically design alcohol based products to be effective in a variety of circumstances including bacteria, viruses and fungi.

However, there is isn’t very much high quality research exploring how lower strength alcohol based products may also affect the viral envelope. The current studies team sought out to see if alcohol based mouthwashes which come into contact with a person’s throat, could in theory inhibit the transmission of the virus or at least reduce its severity.

If a significant spread of the virus originates in the throat, then it would make sense to trial the efficacy of products which may have the potential to kill the virus at this location. However, due to the speed of how the virus emerged, there is still much to learn about how it functions.

Scientists do not currently known how the virus moves from a person’s nose or throat to their lungs. It is possible this could occur through breathing in dead viral cell debris, viral shedding or neighboring cells becoming infected.

However, with the current urgency of the public health crisis, it is necessary to propose speculative theories which scientists can test in laboratories and then in clinical trials. And although there is little scientific literature which explores the effect of low alcohol concentrations on viral envelopes, the team drew on research that looked at the effects on mammalian cells.

The researchers discovered after studying the literature, there was good reason to suppose that some low alcohol based products may in theory be able to disrupt the viral envelope of SARS-CoV-2. They have made it clear though, their research is speculative. More research is needed, nonetheless this current work shows that in s principle this is a valuable area to study.