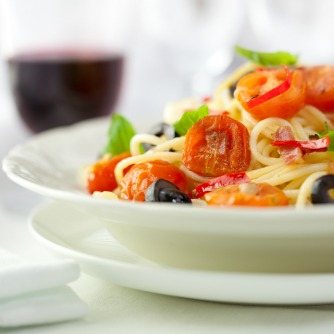 Adults who closely followed the Mediterranean diet were 47 percent less likely to develop heart disease over a 10-year period compared to similar adults who did not closely follow the diet, according to a study to be presented at the American College of Cardiology’s 64th Annual Scientific Session in San Diego.

Among the study’s participants, adherence to the Mediterranean diet was more protective than physical activity. The study, conducted in Greece, bolsters evidence from earlier studies pointing to the diet’s health benefits and is the first to track 10-year heart disease risk in a general population. Most previous studies have focused on middle-aged people.

“Our study shows that the Mediterranean diet is a beneficial intervention for all types of people–in both genders, in all age groups, and in both healthy people and those with health conditions,” said Ekavi Georgousopoulou, a Ph.D. candidate at Harokopio University in Athens, Greece, who conducted the study along with Demosthenes B. Panagiotakos, Ph.D., professor at Harokopio University. “It also reveals that the Mediterranean diet has direct benefits for heart health, in addition to its indirect benefits in managing diabetes, hypertension and inflammation.”

The study is based on data from a representative sample of more than 2,500 Greek adults, ages 18 to 89, who provided researchers with their health information each year from 2001 to 2012. Participants also completed in-depth surveys about their medical records, lifestyle and dietary habits at the start of the study, after five years and after 10 years.

Overall, nearly 20 percent of the men and 12 percent of the women who participated in the study developed or died from heart disease, a suite of conditions that includes stroke, coronary heart disease caused by the buildup of plaque in the heart’s arteries, acute coronary syndromes such as heart attack, and other diseases. Other studies have shown Greeks and Americans have similar rates of heart disease and its risk factors.

The researchers scored participants’ diets on a scale from 1 to 55 based on their self-reported frequency and level of intake for 11 food groups. Those who scored in the top-third in terms of adherence to the Mediterranean diet, indicating they closely followed the diet, were 47 percent less likely to develop heart disease over the 10-year follow-up period as compared to participants who scored in the bottom-third, indicating they did not closely follow the diet. Each one-point increase in the dietary score was associated with a 3 percent drop in heart disease risk.

This difference was independent of other heart disease risk factors including age, gender, family history, education level, body mass index, smoking habits, hypertension, diabetes and high cholesterol, all of which the researchers adjusted for in their analysis.

The analysis also confirmed results of previous studies indicating that male gender, older age, diabetes and high C-reactive protein levels, a measure of inflammation, are associated with an increased risk for heart disease.

While there is no set Mediterranean diet, it commonly emphasizes fresh fruits and vegetables, whole grains, beans, nuts, fish, olive oil and even a glass of red wine. Earlier research has shown that following the traditional Mediterranean diet is linked to weight loss, reduced risk of diabetes, lower blood pressure and lower blood cholesterol levels, in addition to reduced risk of heart disease.

“Because the Mediterranean diet is based on food groups that are quite common or easy to find, people around the world could easily adopt this dietary pattern and help protect themselves against heart disease with very little cost,” Georgousopoulou said.

The study was limited to participants living in and around Athens, Greece, so the sample does not necessarily reflect the health conditions or dietary patterns of people in more rural areas or the rest of the world. However, previous studies have also linked the Mediterranean diet with reduced cardiovascular risks, including the Nurses’ Health Study, which included nearly 75,000 American nurses who were tracked over a 30-year period. Additional studies in other adult populations would further advance understanding of the diet’s influence on heart disease risk.

The study, “Adherence to Mediterranean is the Most Important Protector Against the Development of Fatal and Non-Fatal Cardiovascular Event: 10-Year Follow-up (2002-12) Of the Attica Study,” will be presented on March 15 at the American College of Cardiology’s 64th Annual Scientific Session in San Diego. The meeting runs March 14-16.

Another study about diet to be presented at ACC.15 suggests cardiologists and other doctors may not be prepared to counsel patients on heart healthy diets, so efforts to help patients adopt healthier diets may fall short.

The small study, based on a survey of 236 cardiologists and internal medicine physicians and trainees at a large tertiary academic medical center, found that although physicians rate nutrition to be as important as statins in terms of reducing the risk of cardiovascular disease, only 13.5 percent agreed or strongly agreed that they were adequately trained to discuss nutrition with patients. The 28-question online survey was administered to identify gaps in nutritional knowledge and assess physician attitudes and practices related to nutrition for cardiovascular disease prevention. Two out of three fact-based questions were answered correctly. Cardiologists and internal medicine physicians scored about the same. Nearly all (89.7 percent) knew the Mediterranean diet was shown to reduce cardiovascular disease in randomized controlled trials, but less than half (45.5 percent) knew that low-fat diets had never been shown to do so.

What was surprising to researchers was how many physicians surveyed were not equipped to give practical recommendations for choosing heart healthy foods. For example, while the physicians knew about the blood pressure lowering effects of fruits and vegetables and LDL-cholesterol lowering effects of soluble fiber (81.7 and 87.6 percent, respectively), a much smaller percentage of respondents were able to correctly identify foods high in soluble fiber or an oily fish (69.5 and 30.8 percent, respectively).

“It’s one thing to know an oily fish is a good thing, but being able to advise patients on which types of fish are high in omega-3 fatty acid is another,” said Eugenia Gianos, M.D., assistant professor of medicine in the Leon H. Charney Division of Cardiology at NYU Langone Medical Center.

Authors say the study underscores the need for additional training in nutrition for cardiologists and other physicians, as well as more opportunities to educate patients. Nearly two out of three doctors spent less than three minutes counseling patients about diet and lifestyle modifications. “In some ways we were pleased to see that most doctors were spending any time discussing diet and exercise given how short medical appointments are these days, but we would have liked to see more referrals to dieticians,” Gianos said.

The data are limited due to the low response rate (26.7 percent) and that it was limited to a single center. Still, Gianos said she believes there is great potential to improve patient care through physician education with more extensive emphasis on diet in their core curriculum, self-learning opportunities, and collaboration with dietitians or other health care professionals. She said this type of survey should be fielded at other medical centers.

The American College of Cardiology has identified heart healthy diets as critical for cardiovascular disease risk reduction and recommends physicians provide dietary guidance to those at risk for or with established disease.