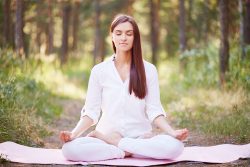 It has long been known that meditation and other breath focused practices will increase the strength of focusing on tasks. A study by research staff at Trinity College Dublin and Global Brain Health Institute at Trinity have found the neurophysical connection between breathing and attention.

Yoga and other breath focused meditation practices have many cognitive benefits. Better focus, less wandering of the mind, an increase in positive emotions, arousal levels heightened and less emotional reactivity are among the benefits. Until the recent study there was no known direct neurophysical connection known between cognition and respiration or even suggested at.

For the first time breathing has been shown to directly affect levels of noradrenaline, a natural brain chemical messenger. Noradrenaline is released when a person is curious, challenged, exercised, focused and emotionally aroused. The brain gets help in growing new connections when noradrenaline is produced at the right levels. Breathing actually directly affects brain chemistry, our attention is enhanced and our brain health is improved.

The study found that participants who focus well during tasks that demand a great amount of attention had much greater synchronization between their attention and breathing. Those who focused poorly did not fair as well. The researchers believe that breath control practices might be used to stabilize attention and increase the health of the brain.

Yoga practitioners have known for over 2500 years that breathing influences the mind. The researchers looked at the connection that would explain the claims by breath measurements, reaction time and then activity of the brain in the locus coerulues, a small region of the brain stem where noradrenaline is produced. When a person is stressed, their brain produces too much noradrenaline and focusing is difficult. On the other hand, when we are feeling sluggish too little noradrenaline is produced. The researchers found that there is a ?sweet? spot of noradrenaline where our thinking, our memory and our emotions are much clearer.

Additional research could assist in developing non pharmacological therapies for those who might have attention compromised challenges such as traumatic brain injuries and ADHD, and additionally helping older people in cognition support. The research is particularly encouraging for further research in aging of the brain. As brains age they will typically lose mass, but less so in the brains of people who have practiced meditation for quite a while. Younger brains have less risk of dementia and meditation practices and techniques will strengthen the brain networks. A possible explanation for this is that by using breathing to control noradrenaline in the correct dose, we are helping our brain build new connections between the brain?s cells.

Buddhists and Yogis believe the breath to be a suitable object for meditation practices. Pranayama which is regulated breathing in a precise way and observing the breathing, causes changes in attention, arousal, and emotional control that are of great benefit to the person meditating.

Mindfulness (focus on breathing) and deep breathing practices (such as pranayama) are the traditional forms of breath focused practices. Mindfulness which emphasizes focus and attention will benefit those with compromised attention spans. The person focuses solely on the sensations of breathing but does not make any effort to control them. When a person?s level of arousal results in poor attention such as with driving while drowsy or a panic attack, this level of arousal could by controlled with controlled breathing.

To view the original scientific study click here: Coupling of respiration and attention via the locus coeruleus: Effects of meditation and pranayama