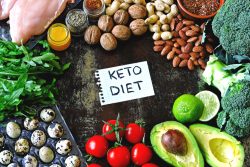 Yale researchers studying mice have found that a ketogenic diet can produce health benefits in the short term, however produce negative effects after approximately a week. Their results do offer early indications that this diet could over limited time periods improve human health by lowering inflammation and the risk of diabetes.

A ketogenic diet consists of 70% – 80% of calories from fat, 10% – 20% from protein and 5% – 10% from carbohydrates. This diet has become increasingly popular and has been touted as a weight loss regimen. The research currently conducted on mice may be an important first step toward the possibility of clinical trials in humans.

The study has shown that the positive and negative effects of the keto diet both relate to immune cells known as gamma delta T-cells which are tissue protective cells that help lower inflammation and diabetes risk.

The keto diet makes the body burn fat. As the body’s glucose level becomes reduced because of the diet’s very lower carbohydrate content, the body will act as if it is in a state of starvation, although it isn’t. The body then begins to burn fat instead of carbohydrates. This process produces chemicals called ketone bodies as another source of fuel. As ketone bodies are burned, the tissue protective gamma delta T-cells will increase throughout the body.

However, when the body thinks it is starving but not really in starving mode, storage of fat is also happening currently with the breakdown of fat. As the mice continued to eat this high fat/low carb diet beyond one week, they consume more fat than their body can burn and therefore develop diabetes and obesity. The protective gamma delta T-cells are lost in their fat.

Long term clinical studies are still necessary in humans to validate the anecdotal claims of the health benefits of a keto diet. Before this type of diet can be prescribed, large clinical trials in controlled conditions is necessary to fully understand the mechanism behind any metabolic and immunological benefits or any potential harm to people who are pre-diabetic and overweight.

Both Type 2 Diabetes and obesity are lifestyle diseases. Diet allows people in one way to be in control.

The findings highlight the interplay between the immune system and metabolism and how it coordinates the maintenance of healthy tissue function.