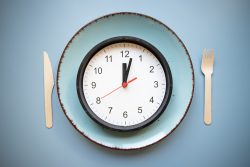 Paving the way for potential dietary treatments, researchers have revealed a promising link between our genes and what we eat. Exploring this connection could aid in treating serious conditions like diabetes, heart disease, and cancer. Recent research has sparked new insights into the potential benefits of intermittent fasting. According to a study published in Cell Metabolism, when mice only ate during certain periods of time, there were profound changes in gene expression impacting almost 80% of all genes. This can lead to improved blood sugar regulation and decreased risk for obesity as well as reversing signs typically associated with aging.

Genes are like intricate blueprints, written in DNA and turned into tangible proteins by cellular machinery. This protein production is influential and controls how the body metabolizes fat, functions immunologically and more. New scientific discoveries suggest that different feeding patterns can change when genes are expressed. For example, one study found that by regulating when mice were allowed to eat, their diet impacted which metabolic pathways were activated or suppressed. This demonstrates how simple lifestyle choices may affect our genetics and health significantly. By restricting diet during certain time periods your organs “wake up” particular blood sugar regulating genes at mealtimes and switch them off during fasting periods.

Maintaining a consistent eating schedule helps to keep our body in sync with the natural rhythms of living. Time-restricted eating can promote adherence to this pattern by constraining meals within an 8 or 10 hour window and fasting for the remainder of the day. This practice, called intermittent fasting, is not just simple dieting – it reinforces healthy biological activity in both mind and body.

Time-restricted eating has recently emerged as a promising new dietary pattern that offers many health benefits. In one study, two groups of mice were both fed high calorie diets. One group was given access to food for 9 hours each day while their counterparts ate freely at any time. The results showed impressive reductions in weight gain among those with the restricted feeding times, although they consumed an equal amount of calories. These exciting findings suggest potential positive impacts on obesity and diabetes risk factors, cardiovascular health, gut function and cardiometabolic well-being.

The study of the time-restricted diet yielded remarkable results. It was found to reduce inflammation, enhance cellular housekeeping and balance RNA & protein levels, which are all contributing factors in promoting a longer life. On a molecular level, pathways activated by this diet, saw drastic improvements across multiple organ systems with its effects already linked to improved health.

Despite interesting findings from testing with animal models, there is still have an incredibly long journey ahead until time-restricted eating is proven to provide the same results in humans. We must keep that in mind when exploring this area of medical research. While exciting discoveries can take place at a cellular level, only further tests will give us conclusive evidence for any effects on people.

To view the original scientific study click below:
Diurnal transcriptome landscape of a multi-tissue response to time-restricted feeding in mammals