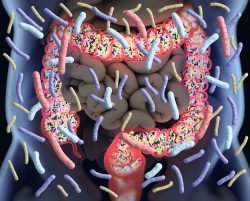 There are trillions of benign bacteria that live in our intestines. The immune system keeps them in constant balance which in turn ensures they are harmless to humans. A team has been able to demonstrate how some natural antibodies keep them in check. Their discoveries could make a substantial contribution to developing superior vaccines.

The bacteria that live in the intestine comprise from 500 to 1000 different species. They are known as intestinal flora which play a key role in the digestive process and also preventing infections. They are not like pathogens which invade the body from the outside. The body’s immune system tolerates them and, therefore, they are harmless.

It is unknown how the immune system is able to maintain this very delicate balance. But it is known that IgA or type A immunoglobulins play a significant role. These substances naturally defend parts of the immune system and will recognize an exogenous pathogen.

The researchers recently have shown that IgA antibodies from a mouse model specifically will limit the fitness of any benign bacteria at a variety of levels. This will enable the immune system to tweak the microbial balance in the intestines and successfully demonstrates that the immune system will recognize and specifically restrict these bacteria.

The most common antibodies in the immune system are IgA antibodies and are secreted by special cells in the mucous membranes. They make up about 65% of human immunoglobulins. Interestingly, most IgA antibodies that are produced by the body are directed towards benign bacteria found in the intestinal flora. By not having this immune protection these microorganisms could have a negative effect on a person’s health and cause diseases of the intestines. It has remained unsolved however, the way IgA antibodies regulate the consensual coexistence in the intestines.

Until now, studying IgA antibodies found in their natural form in mouse models was not possible. In the team’s experiment, they were able to conquer this hurdle. They were able to succeed in producing sufficient amounts of IgA antibodies specifically administered against a type of Escherichia Colo Bacteria which is a typical bacterium in the intestine. The antibodies were able to recognize and bound a building block on the microorganism’s membrane.

They succeeded in tracking the in-viva and the in-vitro effect in germ free mouse intestines with exact accuracy. The antibodies affected the fitness of the bacteria in a variety of ways. For example, the mobility of the bacteria was restricted or they were able to hinder the uptake of sugar building blocks for the bacteria’s metabolism. This signifies that the immune system is able to influence the benign bacteria through a variety of approaches on a simultaneous basis or IgA parallelism.

Why the immune system is able to achieve an equilibrium with the benign bacteria while also being able to destroy pathogenic invaders seems to have been conclusively clarified. The experiment shows that IgA antibodies can fine-tune the balance between the intestinal flora and the human organism.