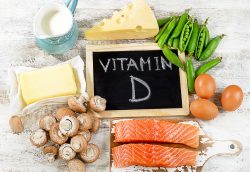 A recent study has revealed a promising connection between Vitamin D levels in the human brain and lower rates of dementia. It suggests that higher amounts may be associated with decreased risk as people age, but further investigation is needed to fully comprehend how this crucial vitamin can influence cognition. While some possible causes for Alzheimer’s Disease are known, much more research into its origin remains an important area of inquiry.

Tufts researchers conducted a thorough review of brain tissue samples from 209 participants in the Rush Memory and Aging Project, which has been tracking Alzheimer’s progression since 1997. They were looking to examine the link between vitamin D levels and rates of dementia or mild cognitive impairment.

Remarkably, their findings indicated that individuals with higher amounts of Vitamin D had up to 33% lower odds for developing such conditions. The sample included 92-year olds at time of death; 77% were female while 72% possessed 12+ years worth of formal education. Analyses demonstrated different regions in the brain responded differently depending on whether it was linked with Alzheimer’s disease related changes, vascular issues or neither. Astonishingly these discoveries display an undeniable relationship between increased Vitamin D intake and reduced likelihoods concerning dementia/cognitive decline.

Previous research has linked a healthy diet and adequate vitamin D levels to improved cognitive functioning in older adults. Vitamin D is known for its important role in keeping bones strong, and thought to have anti-inflammatory properties that protect the brain from damage or worsening of neurological conditions. Foods full of this powerhouse vitamin include oily fish (like salmon), dairy products & beef liver but it can also be attained from natural sunlight exposure in 10–30 minute increments three or more times per week.

The findings suggest that while there may be an association between vitamin D levels in the brain and cognitive function, these results are only indicative of a correlation – not necessarily causation. The study was also limited to those who had normal levels of Vitamin D; so it did not look at how insufficient amounts might affect cognition. Lastly, authors suggested another possible interpretation for their data could be that higher concentrations point to greater “cognitive resilience” even with neurological impairment present.

This study casts doubts on the long-held belief that amyloid plaques could be a cause of Alzheimer’s. In fact, no correlation was found between vitamin D levels and plaque buildup in patients with dementia or cognitive impairment. As such, numerous clinical trials attempting to treat this condition have struggled due to an absence of consensus about its potential causes – something which further highlights how complex Alzheimer’s disease really is.

Vitamin D has been identified as a potential contributing factor in cognitive impairment, although exactly how remains unclear. This study is the first of its kind to examine Vitamin D levels directly within the brain and explore any relationship with cognition. Research suggests that vitamin D may be involved in cell-signaling pathways connected to neurodegeneration. However, understanding this process continues to remain complex due largely to incomplete evidence on whether low levels of vitamin D alone are responsible for impairments or if other factors also play a role.