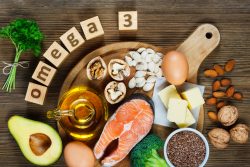 A team of scientists has found that levels of Omega 3 fatty acids in blood erythrocyes are excellent indicators of mortality risk. A long-term group study was utilized for the study data, the Framingham Offspring Cohort. This cohort has been observing the residents living in the Massachusetts town since 1971. They concluded that by having higher levels of omega 3 fatty acids in their blood as a result of regularly adding oily fish to their diet, there was an increase in life expectancy by close to five years.

Omega 3 fatty acids found in the blood are as acceptable as a mortality predictor from any cause such as smoking. This is according to a study which involved the IMIM (Hospital del Mar Medical Research Institute) along with the Fatty Acid Research Institute in the U.S. and also a variety of universities in Canada and the U.S.

In contrast, those people who smoke regularly lose 4.7 years of their expectancy of their life which is the same as a person would gain if they had increased levels of omega 3 fatty acids in their blood.

The researchers looked at data of blood fatty acids in 2,240 people over age 65 who were watched over about eleven years. The researcher’s goal was to confirm which fatty acids would function as great mortality predictors beyond factors that were already known. The findings were that four types of fatty acids which included omega 3, satisfied the role. It was interesting to observe that two of the fatty acids were saturated fatty acids which are typically linked to cardiovascular risk. However, in this study they indicated a longer life expectancy.

The findings might contribute to dietary recommendations for individual requirements found in the blood for a variety of fatty acids. The research also indicated that even small diet changes in a healthy direction may have an effect more powerful that what had been thought. And it is never too early or too late to think about and making these changes.

The team’s next goal is to analyze in a small population group the same indicators of European descent to see if the results that can be obtained outside the U.S. The AHA (American Heart Association) has recommended consuming oily seafood such as anchovies, salmon and sardines two times per week due to their omega 3 acid health benefits. This is a conservative recommendation and some people may need to consume more.