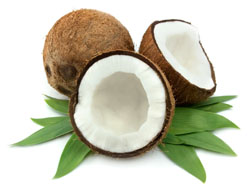 Coconut oil was once considered a “bad fat” since it contains saturated fatty acids, however it has a different chemical structure than saturated fats from animals or those that are synthetically produced such as margarine and other hydrogenated oils. Natural sources of saturated fats are gaining appreciation as beneficial, particularly for the brain. Even saturated fats from animals are not necessarily bad. It is excessive arachidonic acid which is found in the fat of grain fed animals such as most beef that is best avoided. That is caused by their diet which is too high in omega-6 polyunsaturated fatty acids and lacking omega-3 fatty acids. Meat from 100% grass fed beef or buffalo contains less arachidonic acid and a healthy balance of the two types of polyunsaturated fats.

The new study evaluated the health effects of consuming extra virgin coconut oil, focusing on how it affects heart health and a range of measurements including body weight, size, and circumference.

The average age of the participants was 62.4 years, 70% were elderly individuals, and 63.2% were males. During the first phase which lasted three months, 136 enrollees were put on a standardized diet. From the third month onward, the 116 who completed the first phase were placed in two groups with 22 remaining on the diet while 92 were put on the diet with .43 ounces daily of extra virgin coconut oil, which is equivalent to about 1 Tablespoon.

The results of the 3 month study showed that relative to the standard diet, the coconut oil group saw a decrease in all six of the bodily parameters measured, including weight loss of 1.3 pounds and waist size reduction of almost an inch. Additional testing also showed improvements in cardiovascular health. Previous studies of coconut oil have shown many benefits including improved cognition and enhanced nutrient absorption.

One of the advantages of coconut oil is that it does not oxidize during cooking as is the case with most other oils. That is one of the reasons why hydrogenated oils were created. Unfortunately they contain dangerous trans fatty acids so are best avoided. Back in the 1980’s many doctors and dieticians thought that coconut oil was bad because of it’s saturated oil content. Since then dozens of studies have found the opposite to be true. Also demographic studies have typically shown better heart health in countries where coconuts are eaten regularly.