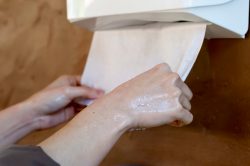 A recent study by a team at the University of Leeds, UK was set up to determine if the use of paper towels or air dryers is more effective for getting rid of microbes when the hands are still drying and contanminated.

Hand drying is especially critical in helping decrease the spread of critical microbes which includes COVID-19. Failure to remove these microbes increases their transmission to environmental surfaces which increases the opportunity for them to be transmitted and spread. The study set out to investigate if there could be differences in the extent of transmission of the virus according to each hand drying method outside of the bathroom to a hospital environment.

Environmental surface areas were sampled after the participant’s contact with hands or apron. These site samples included doors, stair handrails, chairs in ward and public areas, lift buttons, phones, buttons on intercoms to wards, stethoscope tubing and chest and head piece, the aprons, and armchairs that might have been indirectly exposed to the aprons. For the latter sample site, the participants were told to lay their arms across their chest while using the apron and before resting their arms on the chair.

Viral dispersal to apron/clothing was 5 times higher with air dryers versus the paper towels. Phage transfer from aprons to armchairs via the crossed arms was detected only following air dryer use. This suggests that the transfer of microbes to environmental surfaces can occur directly from hands that remain contaminated after air drying, but also indirectly from a person’s body that has been contaminated during air drying.

The research team concluded that there are very distinct differences in regards to air drying versus paper towel drying in the residual microbial contamination of the participant’s body and hands. These differences in contamination translate into quite a bit greater microbe levels of contamination after air drying versus the use of paper towels from body and hands beyond the bathroom. Since public bathrooms are used by staff, visitors and patients, the hand drying method used can promote the increase (using air dryers) or decrease (using paper towels) pathogen transmission in hospitals.

As You Age Seven Hours of Sleep Is Optimal