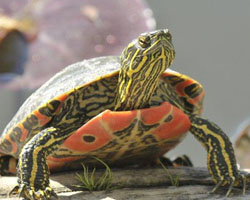 Age defying species such as the giant red sea urchin, the painted turtle, the naked mole rat and the bowhead whale may begin teaching us how to extend our own lives. All these species stand out because they exhibit negligible senescence, the ability to grow older without suffering functional declines or any age-related increase in mortality. Apparently, these species have something we lack. This something, according to a new study, is gene network stability.

A stabilized gene network promotes longer lifespan. The new data is consistent with Dr. Villeponteau’s model that keeping the optimal gene network at youth from drifting with age generates longer life. Likewise, interventions that nudge gene expression back to that of the youthful gene network reverses aging. That is the goal with all the Life Code products, particularly Stem Cell 100 and Stem Cell 100+.

The new study was undertaken by scientists from the biotech company Gero in collaboration with Robert J. Shmookler Reis, Ph.D., a professor of geriatrics at the University of Arkansas. Dr. Shmookler Reis enjoys the distinction of having extended by a factor of 10 the lifespan of the nematode Caenorhabditis elegans.

These scientists noticed that in long-lived animals, negligible senescence is accompanied by exceptionally stable gene expression. And stable gene expression, they reasoned, could be attributed to gene network repair systems. To test this idea, the scientists devised a mathematical model of a genetic network. This model not only managed to account for the age-independent mortality exhibited by long-lived animals, it also identified gene network parameters that influence longevity. These parameters include effective gene network connectivity, effective genome size, proteome turnover, and DNA repair rate.

The scientists published their findings August 28 in the journal Scientific Reports, in an article entitled, ?Stability analysis of a model gene network links aging, stress resistance, and negligible senescence.? This article argues that under a very generic set of assumptions, there exist two distinctly different classes of aging dynamics.

?If the repair rates are sufficiently high or the connectivity of the gene network is sufficiently low, then the regulatory network is very stable and mortality is time-independent in a manner similar to that observed in negligibly senescent animals,? wrote the authors. ?Should the repair systems display inadequate efficiency, a dynamic instability emerges, with exponential accumulation of genome-regulation errors, functional declines and a rapid aging process accompanied by an exponential increase in mortality.?

The authors added that the onset of instability depends on the gene-network properties only, irrespective of genotoxic stress levels. Essentially, instability can be viewed as being hard-wired in the genome of the species.

Nonetheless, the authors said that their model implies many possibilities to stabilize a regulatory network and thus extend lifespan. Some of these possibilities, in fact, have already been exploited by nature, accounting for some of the lifespan increases observed to have occurred in evolution. For example, a model parameter that the authors call the coupling rate can be adjusted by increasing or decreasing the degree of gene network connectivity.

A biological embodiment of this parameter is the degree to which the nuclear envelope reduces the effective interactions between the genes and the cellular environment. Once the nuclear envelope became available, organisms that used it enjoyed a dramatic increase in complexity and life expectancy.

Such observations have implications for potential life-extending interventions. For example, experimental reduction of the network connectivity by silencing of kinase cascades involved in regulation of transcription factors leads to a dramatic effect on the lifespan in C. elegans (up to a 10x lifespan extension by a single mutation).

The relation between stresses, stress resistance, and aging, the authors explained, can also account for the way damage to gene regulation from stresses encountered even at a very young age can persist for a very long time and influence lifespan. Such effects, the authors believe, indicate that further research into the relation between gene network stability and aging will make it possible to create entirely new therapies with potentially strong and lasting effect against age-related diseases and aging itself.