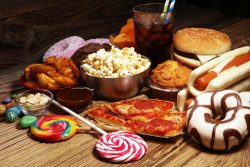 A new study conducted on mice has suggested that a diet that is high in the sugar fructose exacerbates inflammatory bowel disease (IBD). It appears that changes in gut bacteria mediate the effect.

IBD is an overall term for a variety of conditions that feature chronic inflammation of the digestive system. The two most common types are Crohn’s Disease and ulcerative colitis. Symptoms of IBD include stomach pain, persistent diarrhea, bloody stools or rectal bleeding, fatigue and unexplained weight loss.

The CDC reports that the number of adults who receive an IBD diagnosis every year in the U. S. has increased from 2 million in the year 1999 to 3 million in 2015.

Earlier research in animals found that a diet which is high in fructose can damage the colon and also lead to inflammation. This suggests that a higher intake of fructose may be a reason for the increased incidence of IBD in recent years.

Population studies have not always indicated a link between refined sugar intake and IBD. One large study did not find an association between any specific dietary pattern and IBD although the results did show that a diet which is high in soft drinks and sugar did increase the risk of a person developing ulcerative colitis in cases where intake of vegetables was low.

High fructose corn syrup is added to candy, baked goods, sodas and other processed foods by manufacturers of these products. Consumption of fructose has increased by nearly one-third in the U.S. over the last 30 years according to estimates. The increase in IBD parallels the higher levels of the consumption of fructose not only in the U. S. but other countries as well.

The team involved in the recent study set out to investigate whether fructose exacerbates inflammation in mouse models with IBD. They additionally tested the idea that changes in the microbiota in the gut mediate the inflammatory effects of consuming fructose.

The team’s findings have provided evidence of a direct association between IBD and dietary fructose which support the idea that the high consumption of fructose could exacerbate the disease in people who have IBD. This is especially relevant because the potential exists in providing people with IBD guidance on diet choices.

The team performed a variety of experiments with the goal of investigating which effects a diet high in fructose could have on three different mouse models with IBD.

The team also noted that giving antibiotics to the mice reduced the damaging effects of a diet high in fructose on the colon. This suggests that bacteria found in the gut were mediating the harmful effects.

In contract, transplants of fecal material obtained from mice that had been fed the high fructose diet increased inflammation in the mice who had received them. This shows additional evidence of the role gut bacteria play in IBD.

When the team looked more closely at the mucus layer which protects the cells that line the colon, they discovered that the diet high in fructose reduced the thickness by almost one-fifth. Bacteria infiltrated the mucus and became in direct contact with the cells.

They also found that the diet changed the prevalence of a variety of species of bacteria that live in the gut. It boosted the population of a species known as Akkermansia muciniphila. In earlier studies, researchers have shown that this particular species has the ability to degrade mucus and that it is associated with inflammation in the colon.

The second model of IBD used in the experiments involved infecting the mice with a bacterium known as Citrobacter rodentium which also provokes the inflammation found in IBD. These mice were fed high amounts of fructose which worsened the inflammation and also promoted the growth of the bacteria.

The team confirmed the association between IBD and fructose in a genetic model of this disease. This particular model recreates a type of immune response that has the ability to make some people with IBD more likely to develop inflammation in the colon. Once again, consumption of high amounts of fructose increased the inflammation of the colon in these mice.

Researchers say the next step is to conduct more studies on whether people with IBD are at an increased risk of developing colon cancer due to a lifetime of chronic inflammation of the gut. They also plan on developing interventions to help prevent the pro-inflammatory effects dietary fructose.

Dietary Fructose Alters the Composition, Localization and Metabolism of Gut Microbiota in Association with Worsening Colitis