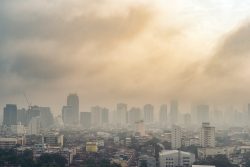 Automobiles and many other sources of air pollution produce nanoparticles. The size of these particles is less than a micron which is one millionth of a meter. Unlike larger particles nanoparticles are so small that some can pass through your lungs into your bloodstream. New findings have found that they build up in diseased areas in our arteries. That may explain why air pollution increases the risk of strokes and heart disease. They also suggest that current efforts and laws to regulate air pollution might be focusing too much on the larger particles which are less dangerous.

Most of these deaths are due to the increased risk of cardiovascular disease. Just being exposed to high air pollution for even short periods can trigger strokes and heart attacks. Long term exposure to air pollution causes vascular damage and the question is why?

It has been suspected that nanoparticles in the air we breathe enter the bloodstream and are then carried to various parts of the body including the heart, blood vessels and arteries. These nanoparticles are made up of mostly carbon compounds so finding them inside carbon based lifeforms like humans is particularly difficult.

The research team at the University of Edinburgh, UK, had volunteers breathe air contained with harmless gold nanoparticles. After 15 minutes these nanoparticles began to show up in the volunteer’s blood and they could still be found in their urine and blood three months later. While the gold nanoparticles are inert, reactive compounds found in air pollution can have a variety of harmful effects.

The team also analyzed surgically removed plaques from people who were at a high risk of stroke. They discovered that the nanoparticles tended to accumulate in fatty plaques which grow inside blood vessels and lead to strokes and heart attacks.

Air quality laws in various parts of the world set limits on particulate matter smaller than 2.5 micrometers which is called PM2.5. This limit is on the total mass of the particles in a cubic meter of air rather than the total number.

The problem is that measuring the number of ultra fine particles is extremely difficult and cannot be accomplished using roadside devices which are widely used to monitor air pollution.

Further studies by the UK team will focus on whether gold nanoparticles can enter the brain. Air pollution does seem to increase the risk of brain disorders such as Alzheimer’s, Parkinson’s and dementia. A recent study discovered tiny iron particles in the people’s brains which may have come from vehicle exhaust.

What can you do about nanoparticles in the air in your home? One possiblity is to purchase a high end air purifier such as the Air IQ. It can remove particles down to 3 nanometers in size which is 100 times smaller than other air purifiers. The purifier is expensive both to purchase and maintain, however it goes far beyond other solutions. Life Code is not associated with the Air IQ company or sales of the product.