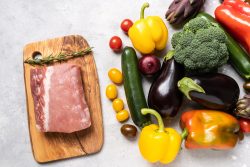 A recent study conducted at the National Institutes of Health, compared people who were on a plant-based/low-fat diet and those who ate an animal-based/low-carb diet and found that those on the plant-based diet consumed fewer calories daily, however showed high blood glucose and insulin levels when compared to the other diet. The studies goal was to compare what effects the two diets had on hormone levels, calorie intake, body weight and more.

Foods high in fat have been considered to result in intake of excess calories due to their high calories with each bite. High-carbohydrate foods on the other hand can lead to big swings in insulin and blood glucose which can increase hunger and result in overeating. The current study looked at determining whether high-fat diets or high-carb diets result in intake of greater calories.

For the study, the team housed a total of 20 adults who did not have diabetes for a 4 week continuous period. The participants included 9 women and 11 men and were given either a low-carb/animal-based diet or a low-fat/plant-based diet for a two-week period. After the initial two-week period, the participants were given the alternate diet. Both diets contained minimally processed foods and contained equal amounts of vegetables that were non-starchy. All participants had three meals each day and also snacks, and they could eat as much as they wanted.

The results have shown that the participants who were on the diet low in fat consumed 550 to 700 less calories daily than when they consumed the low-carb diet. And although there were big differences in intake of calories, they reported there were no differences in how they enjoyed their meals, in fullness between the two different diets and no problems with hunger.

Participants were able to lose weight on both diets, however, the diet that was low-fat resulted in a significant loss of their body fat. Although consuming food that has plenty of high glycemic carbohydrates that can result in significant swings in insulin and blood glucose, people who ate the low-fat/plant-based diet showed a pronounced reduction in intake of calories and also loss of body fat. This challenges the thought that diets that are high-carb can cause overeating. On the flip-side, the low-carb/animal-based diet did not cause weight gain although it was high in fat.

The low-fat/plant-based diet contained 75.2% carbs and 10.3% fat. The low-carb/animal-based diet was 75.8% fat and 10% carbs. Each diet contained close to 14% protein and were identical for total calories, although the diet low in carbs contained twice as many calories for each gram of food than the diet that was low-fat.

The team notes that their findings do suggest there are benefits to both of the diets at least for the short-term. The plant-based/low-fat diet helped curb the appetite, the low-carb/animal-based diet showed more steady and lower glucose and insulin levels. However, they can’t really say whether the differences can be sustained long-term.

The study had not been designed to recommend diets for weight loss and participant’s results could have been different if they were wanting to lose weight. Additionally, all the meals were prepared and given to the participants in their inpatient setting. This could make results somewhat difficult to repeat in another setting where things such as food availability, food costs, and meal preparation restraints might make adherence to the diets more challenging. The clinical environment was tightly controlled however, which ensured the accuracy of the data and ensured the objective measurement of the participant’s food intake.

Effect of a plant-based, low-fat diet versus an animal-based, ketogenic diet on ad libitum energy intake.