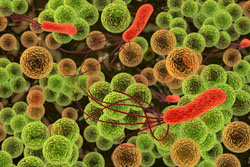 New research provides further evidence of the important role that gut microbes play in health by revealing they alter host gene expression in a diet-dependent manner. Using mice, the researchers discovered that a Western diet prevents many of the gene expression changes of a plant rich diet. This provides important and additional evidence of the importance of eating lots of fruits and vegetables.

A study of the relationship between colon bacteria, diet and the genes of the host by a team at the University of Wisconsin-Madison (UW-Madison) was published in the journal Molecular Cell.

Genes found in strips of DNA contained in chromosomes are the blueprint for making organisms and sustaining life. However, while their DNA makeup is relatively fixed, genes respond to changes in environment.

Interactions with the environment do not change the genes, but they alter their expression by switching them on and off through chemical tags on the DNA.

The complete set of genetic material contained in our genes is called the genome, and the multitude of molecules that tell the genome what to do is called the epigenome.

Our gut is home to trillions of microbes altogether, they can weigh up to 2 kilograms. They not only help to digest food via fermentation, but in the process produce molecules called metabolites that influence health and disease for instance, to improve immune function and defend against infection.

In their paper, the UW-Madison researchers explain that while we have discovered that the colonies of microbes in our digestive tract collectively termed the gut microbiota produce a myriad of metabolites that affect health and disease, the underlying molecular mechanisms are poorly understood.

For their study, the researchers used mice raised on two different diets: one rich in plant carbohydrates (mimicking a human diet rich in fruits and vegetables) and the other high in simple sugars and fats (mimicking a Western diet).

The researchers found that a small group of short-chain fatty acids metabolites produced when gut bacteria ferment nutrients from plants were communicating with the cells of the host animals through the epigenome.

One of the investigators, John M. Denu, a UW-Madison professor of biomolecular chemistry and a senior researcher at the Wisconsin Institute for Discovery, says the short-chain fatty acids, and potentially many others, are partially responsible for the communication with epigenome.

When Prof. Denu and colleagues compared the mice fed on a Western-style diet with the ones on a diet rich in plant carbohydrates, they found the Western-style diet prevents many of the epigenetic changes that occur in the plant-rich diet.

In a further set of experiments, the researchers then supplemented the diet of mice raised in a germ-free environment (so they have no gut microbiota to speak of) with the short-chain fatty acids metabolites of gut bacteria fermentation.

They found that the short-chain fatty acid supplements restored the types of epigenetic changes seen in normal mice raised on the plant-rich diet.

Prof. Denu suggests their findings help show “the collection of three short-chain fatty acids produced in the plant-based diet are likely major communicators. We see that it is not just the microbe. It’s microbial metabolism.”

He and his colleagues also note that while foods rich in fat and sugar – hallmarks of the Western diet are more easily digested, they are not necessarily a good source of nutrients for gut microbes. This results in a less diverse microbiome, and less communication with the epigenome, they suggest.

They conclude that their findings have “profound implications for understanding the complex functional interactions between diet, gut microbiota, and host health.”

Another surprising result of the study is that the communication between the gut microbiome and the host reaches beyond the colon. For example, the team found evidence of communication with cells of the liver and fatty tissue of the gut.