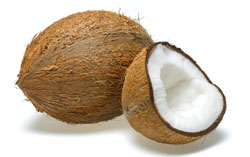 Coconut oil was once considered a bad fat, as it contains saturated fatty acids which conventional nutritionists did not distinguish from synthetically produced ones such as margarine. We know far better now, and increasingly, natural sources of saturated fats are gaining appreciation as not only not-bad, but actually beneficial, particularly for the brain.

The new study evaluated the health effects of a nutritional treatment with extra virgin coconut oil, focusing primarily on how it affects HDL cholesterol and a range of anthropmetric measurements (e.g. body weight, size, circumference).

The average age of the participants was 62.4 years, with 70% of elderly individuals, and 63.2% of males. All of them were hypertensive and 94.5% had blood lipid profiles indicating dyslipidemia and on standard, cholesterol lowering drug treatment.

In the first phase, a three month period, 136 enrollees were put on a standardized diet. From the third month onward, the 116 who completed the first phase were place in two intervention groups: 22 remained on the diet, and 92 were put on the diet + 13 ml (.43 ounces) daily of extra virgin coconut oil, which is equivalent to about 14 grams, or about 1 Tablespoon (15 grams).

The results of the the three-month coconut oil intervention showed that relative to the standard diet, the coconut group saw a decrease in all six of the bodily parameters measured, including:

This study is far more powerful than may first meet the eye. For instance, at present, pharmaceutical interventions to raise HDL cholesterol lack solid scientific support. Only yesterday, I reported on a new JAMA review which revealed an astounding number of medical procedures have no benefit, even harm, wherein it was concluded that , In patients with low HDL-C levels who are treated with statins, there is no clinical benefit to HDL-C targeted therapies. Considering the fact that pharmaceutical interventions to lower HDL cholesterol have a wide range of serious side effects, the new finding that coconut oil may provide a natural alternative with side benefits, is all the more encouraging.

When one considers these two factors, any safe, diet-based lifestyle modification that can safely raise HDL-C cholesterol, and reduce midsection fat and related anthropometric parameters such as BMI and midsection circumference, is a home run.

This is, of course, not the first time we have reported on the powerful health benefits of coconut oil. In fact, it doesn’t take months, or even days, to observe positive changes in certain populations. We reported previously on what can only be described as an amazing study where just one dose of coconut oil derived medium chain triglycerides produced positive cognitive changes in Alzheimer’s patients in only 90 minutes. You can read about it in greater detail here: MCT Fats Found In Coconut Oil Boost Brain Function In Only One Dose.