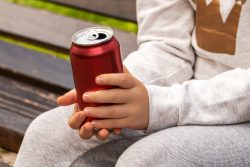 New research from the University of Georgia has shown that daily consumption of high sugar content in beverages consumed by adolescents has impaired performance on a memory and learning task during adulthood.

It is known that children consume the highest levels of added sugar to their diet. This has been linked to health affects relevant to heart disease, obesity and even loss of memory function. But it is not known how this affects children during the development of the region of the brain known as the hippocampus. The hippocampus is specifically important for memory and learning.

The dietary guidelines suggest a sugar intake of less than 10% of calories per day. It has been shown that children between 9-18 consume more than this mainly coming from sugar-sweetened beverages.

In relation to a high sugar intake, researchers wanted to learn more about the consequences of a high sugar diet via gut microbiota. The mice were given their normal diet with a sugar solution of 11%. This is comparable to the sugar in a beverage. They then had the mice perform a memory task. The mice that had consumed the sugar showed a lower capacity to discriminate objects to a specific purpose. The mice without the sugar were able to perform this without any problem.

Further research is needed to explain how high levels of this bacteria in the gut can alter development of the brain.