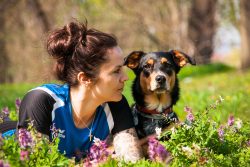 According to new research, not only do dogs give humans boundless joy and love, but can also improve mental health, and dog owners were found to live longer after suffering a stroke or heart attack. This is great news with more evidence that supports the fact that dog’s offer tangible health benefits to humans.

The new evidence comes from a meta analysis of almost 70 years of global research along with a new Swedish study of stroke and heart attack survivors spanning a decade.

The first meta analysis study drew upon data from close to 4 million people living in the U.K., the U.S., New Zealand, Canada, Australia and Scandinavia. The composite analysis included 10 studies with follow ups ranging from one year to 22 years.

Owning a dog was associated with lower blood pressure levels, better cholesterol profiles and increased physical exercise. All these are vital to a healthy heart.

A recent Swedish study also found that those who owned dogs lived longer and did better after suffering a stroke or heart attack. The greatest differences were found between dog non-owners and owners living in single households.

After adjusting for socioeconomic and demographic factors, this study found that the risk of death for those suffering a heart attack and who lived alone but had dogs, was 33% lower than the solitary adults who did not own dogs. Additionally, those who had suffered a stroke and lived with dogs had a 27% lower risk of death compared to those who did not have dogs.

The study analyzed data from outcomes of 182,000 people without and with dogs who had experienced a heart attack and 155,000 people after stroke. The study used health data recorded by the Swedish National Patient Register between 2001 and 2012.

Although all mechanisms can’t be confirmed since this was an observational study, the authors of the study were surprised by the large differences in the outcomes. They believe it is most likely due to exercise and companionship factors. Dogs can be great motivators for physical activity. Physical activity and social support are very important for optimal recovery after a significant cardiovascular event.

Both studies credit the additional exercise that keeping a dog entails. A recent Mayo Clinic study of 1,800 people discovered that those who had canine companions were more likely to practice heart healthy lifestyle habits such as having ideal blood sugar levels, eating well and exercising compared to those without a dog.

Researchers in the studies note that taking care of a dog or dogs also decreases depression and loneliness which can account for the added longevity among adults who live more isolated. Last year the National Poll on Healthy Aging surveyed over 2,000 adults aged 50 to 80. More than half owned a pet and 79% of the senior pet parents said their animal companion reduced stress in their lives. Among those who lived alone and/or reported fair or poor physical health, 72% remarked that their pets helped them cope with emotional and physical symptoms.

It is well known that social isolation is a significant risk factor for worse health outcomes and even premature death. Dog owners typically experience less social isolation and have more interaction with other people.

Of course dog ownership can be physically and financially demanding. A recent JAMA study showed that bone fractures related to seniors walking their dogs more than doubled between 2004 and 2017. 6% of seniors in the National Poll reported their pets caused them to fall or injure themselves. Seniors should always consider their physical limitations before adopting a pet for physical activity. Rover.com reports that dog ownership averages $153 per month so financial costs should also be taken into consideration.

The power of support from companion animals for people living with mental health problems: a systematic review and narrative synthesis of the evidence