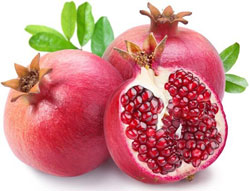 Are pomegranates really the superfood we’ve been led to believe will counteract the aging process? Up to now, scientific proof has been fairly weak. And some controversial marketing tactics have led to skepticism as well. A team of scientists from EPFL wanted to explore the issue by taking a closer look at the secrets of this plump pink fruit. They discovered that a molecule in pomegranates, transformed by microbes in the gut, enables muscle cells to protect themselves against one of the major causes of aging. In nematodes and rodents, the effect is nothing short of amazing. Human clinical trials are currently underway, but these initial findings have already been published in the journal Nature Medicine.

As we age, our cells increasingly struggle to recycle their powerhouses. Called mitochondria, these inner compartments are no longer able to carry out their vital function, thus accumulate in the cell. This degradation affects the health of many tissues, including muscles, which gradually weaken over the years.

One molecule plays David against the Goliath of aging

The scientists identified a molecule that, all by itself, managed to re-establish the cell’s ability to recycle the components of the defective mitochondria: urolithin A. “It’s the only known molecule that can relaunch the mitochondrial clean-up process, otherwise known as mitophagy,” says Patrick Aebischer, co-author on the study. “It’s a completely natural substance, and its effect is powerful and measurable.”

The team started out by testing their hypothesis on the usual suspect: the nematode C. elegans. It’s a favorite test subject among aging experts, because after just 8-10 days it’s already considered elderly. The lifespan of worms exposed to urolithin A increased by more than 45% compared with the control group.

These initial encouraging results led the team to test the molecule on animals that have more in common with humans. In the rodent studies, like with C. elegans, a significant reduction in the number of mitochondria was observed, indicating that a robust cellular recycling process was taking place. Older mice, around two years of age, showed 42% better endurance while running than equally old mice in the control group.

Before heading out to stock up on pomegranates, however, it’s worth noting that the fruit doesn’t itself contain the miracle molecule, but rather its precursor. That molecule is converted into urolithin A by the microbes that inhabit the intestine. Because of this, the amount of urolithin A produced can vary widely, depending on the species of animal and the flora present in the gut microbiome. Some individuals don’t produce any at all. If you’re one of the unlucky ones, it’s possible that pomegranate juice won’t do you any good.

For those without the right microbes in their guts, however, the scientists are already working on a solution. The study’s co-authors founded a start-up company, which has developed a method to deliver finely calibrated doses of urolithin A. The company is currently conducting first clinical trials testing the molecule in humans in European hospitals.

According to study co-author Johan Auwerx, it would be surprising if urolithin A weren’t effective in humans. “Species that are evolutionarily quite distant, such as C elegans and the rat, react to the same substance in the same way. That’s a good indication that we’re touching here on an essential mechanism in living organisms.”

Urolithin A’s function is the product of tens of millions of years of parallel evolution between plants, bacteria and animals. According to Chris Rinsch, co-author, this evolutionary process explains the molecule’s effectiveness: “Precursors to urolithin A are found not only in pomegranates, but also in smaller amounts in many nuts and berries. Yet for it to be produced in our intestines, the bacteria must be able to break down what we’re eating. When, via digestion, a substance is produced that is of benefit to us, natural selection favors both the bacteria involved and their host. Our objective is to follow strict clinical validations, so that everyone can benefit from the result of these millions of years of evolution.”