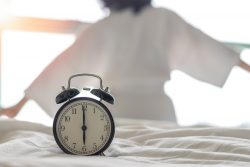 It has been suspected that our body’s various circadian clocks are able to operate independently from our central clock located in the hypothalamus of the brain. At the University of California, Irvine, scientists have found a way to test the theory.

The study included specially bred mice for the purpose of analyzing the body’s network of internal clocks which regulate metabolism. The team figured out how to disable the entire circadian system of the lab mice then jump start their individual clocks. For the experiment, the team activated clocks located in the inside of the skin or liver.

Their results were quite surprising as no one realized the skin or liver could be directly affected by light. Even though all other body clocks were shutdown including the central brain clock, the skin and liver knew what time it was. The organs responded to changes of light as day turned into night. The organs also maintained critical functions. In the case of the liver, this organ prepared to digest food prior to mealtime and convert glucose to energy.

The liver’s circadian clock was still able to detect light presumably through signals from other organs. When the mice were then subjected to constant darkness, the liver’s clock stopped functioning.

Through this study, the team can begin deciphering metabolic pathways which control circadian rhythms, the aging process, and overall well being. In previous studies, scientists examined how circadian clocks could be rewired through factors such as diet, sleep deprivation, and exercise.

Through further studies, the scientists plan to phase in other internal clocks so they can see how different organs communicate with each other. Further experiments could reveal ways to make human internal clocks less misaligned due to modern lifestyles. Exposure to television, computers and cellphone light before bed can scramble internal clocks.