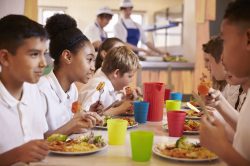 A new study, the first of its kind, has shown that children who consume more vegetables and fruits have better mental health. The study conducted in the UK studied the link between vegetable and fruit consumption, lunch and breakfast choices and how it affects school children.

The team studied data from close to 9,000 children in fifty different schools that included 7,570 secondary children and 1,253 primary children from Norfolk and taken from the Young People’s Health and Well Being Survey. They discovered that the types of lunch and breakfast consumed by both secondary and primary school children was significantly linked to well being. The school children who had diets that were packed with vegetables and fruits had better mental health.

Poor mental health is a significant issue for young people and will likely have long term negative consequences. Pressure from modern school and social media are possible reasons for an increasing prevalence of lower mental attitudes in young people and children.

The school children reported their food choices and also took part in age appropriate tests of mental health that covered relaxation, having good relationships, and cheerfulness.

The research team looked at the link between mental well being and nutritional factors and also took into account any other reasons that might have an impact such as home situations and negative childhood experiences.

The team found out that eating a good diet was linked to better mental health in children. In particular among the secondary school children there was a very strong association between having better mental health and consuming a nutritious diet filled with vegetables and fruits.

The data showed that in a class of 30 secondary school children, about 21 will have had a traditional breakfast and up to 4 will not have had anything before starting the school day. And similarly, at least 3 school children will not have eaten lunch before beginning afternoon classes. This can likely affect physical development, growth and academic performances.

Another interesting discovery they found was that nutrition had just as much or even more of an impact on well being as factors at home such as violence or regular arguing.

Nutrition is a potentially modifiable factor not only at an individual level but also a societal level. It is a significant public health target for developing new avenues to address childhood mental health. School policies and public health strategies need to be developed ensuring that better quality nutrition is available to all children not only before but also during school so as to empower and optimize these children to fulfill their full potential.

To view the original scientific study click below:
Cross-sectional associations of schoolchildren’s fruit and vegetable consumption, and meal choices, with their mental well-being: a cross-sectional study