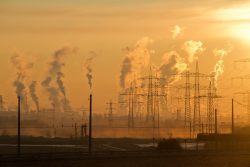 Air pollution may have a harmful effect on more than just the heart and lungs. A new study has shown that it could also be making us less intelligent. The study conducted on elderly people living in China, has found that long term exposure to pollution in the air may hinder cognitive performance in both math and verbal tests.

As we age, the link between mental decline and air pollution becomes stronger. Evidence already shows that air pollution and even the tiniest, invisible particulates in air pollution damages the brain not only in animals but also in humans. Traffic pollution is associated with delinquent behavior in adolescents, dementia, and also stunted development of the brain in kids who attend highly polluted schools.

Almost seven million people die every year from exposure to polluted air. 91% of the world’s population lives in places where air quality exceeds WHO guideline limits. Nine out of 10 people in the world breathe air pollution. Research suggests that older men with less education were the most affected by chronic exposure to air pollution because this group of people generally work manual jobs outdoors.

When mice were exposed to urban air pollution for a period of four months they showed reduced brain function and inflammatory responses within major regions of the brain. This indicates the brain tissues changed due to response to the harmful stimuli which was produced by the air pollution.

Scientists don’t know exactly what aspects of the air pollution particulate cocktail (size, number and composition of particles) contributes most to the reported deterioration of the brain. There is evidence however that nanoscale pollution particles could be one cause.

These nanoscale particles are around 2,000 times smaller than the diameter of a single human hair. They can be moved throughout the body by the bloodstream after they are inhaled. They can even reach the brain directly from the olfactory nerves which give the brain information about smell. This allows the particles to bypass the blood brain barrier which normally protects the brain from a variety of harmful things that circulate in the bloodstream.

Brain samples from postmortem people who had been exposed to high levels of air pollution while living in Manchester, UK and Mexico City showed the typical signs of Alzheimer’s disease. This included clumps of abnormal protein fragments or plaques between nerve cells; an abundance of metal rich nanoparticles such as copper, nickle, cobalt, platinum and iron; and inflammation.

These metal rich nanoparticles found in these brains samples are found to be similar to those that are found everywhere in urban air pollution. These form from burning oil and other fuels, and wear in brakes and engines. They are very often associated with other types of hazardous compounds including polyaromatic hydrocarbons which are naturally found in fossil fuels and can lead to liver and kidney damage and also cancer.

Inhaling nanoparticles found in air pollution repeatedly may have a variety of negative effects on the brain including chronic inflammation of the nerve cells in the brain. When air pollution is inhaled, it may activate microglia, the brain’s immune cells. Breathing air pollution can constantly activate the killing response in these immune cells which can allow dangerous molecules which are known as reactive oxygen species, to form much more often. High levels of these particular molecules might cause cell damage and cell death.

Changes that include a combination of regulation and policy changes and changes to vehicle technology could provide practical ways to reduce the health burden of air pollution throughout the world.

There are a variety of things we can do to protect ourselves. Walking or cycling more and driving less can help reduce air pollution. Driving smoothly and without fierce acceleration or braking, and avoiding driving during rush hours can also help reduce emissions. Keeping car windows closed and recirculating air in the car may also help to reduce exposure to pollution during traffic jams.

Young children are the most vulnerable to health concerns with air pollution since their brains are still developing. Unfortunately, many schools are located near major roads which means a substantial reduction in air pollution is necessary. One solution to help is by planting specific tree species that are good at capturing particulates around schools and along roads.

Additionally, what is good for the heart is also good for the brain. Keeping the brain stimulated and active, eating a good diet which is rich in antioxidants and then keeping active and fit can help build up resistance to air pollution effects. Since it isn’t yet known exactly what mechanisms of air pollution causes damages to our brain and if their effects can be reversed, the best way a person can protect themselves is to avoid and reduce pollution exposure as much as possible.

The impact of exposure to air pollution on cognitive performance.