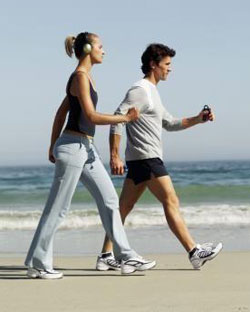 Scientists have observed that more aerobically fit individuals have better memories. To investigate this phenomenon, they used magnetic resonance elastography (MRE), which measures the firmness and elasticity of organs, and found that fit individuals had a firmer, more elastic hippocampus a region of the brain associated with memory.

“MRE is a technique that has been used in organs like the liver, where it can assess the tissue stiffness and offers a reliable, non-invasive method for diagnosing hepatic fibrosis,” explains Guoying Liu, Ph.D. Director of the NIBIB program on Magnetic Resonance Imaging. “This study now demonstrates the tremendous potential for MRE to provide new quantitative biomarkers for assessing brain health as it relates to physical fitness.”

The research was performed by Aron K. Barbey, Associate Professor, Departments of Psychology and Bioengineering at the University of Illinois at Urbana-Champaign, along with his colleagues at Illinois, and with collaborators from Northeastern University in Boston and the University of Delaware. Their results are reported in the March issue of the journal NeuroImage.

The work was based on well established observations of atrophy and reduced size of the hippocampus in cognitively declining seniors. Given that long-known phenomenon, the researchers were puzzled by the fact that in young adults there was a correlation between fitness and memory, but the size of the hippocampus was the same in both groups.

“Most of the work in this area has relied on changes in the size of the hippocampus as a measure of hippocampal health and function. However, in young adults, although we see an increase in memory in more aerobically fit individuals, we did not see differences in hippocampal size,” said Barbey. “Because size is a gross measure of the structural integrity of the hippocampus, we turned to MRE, which provides a more thorough and qualitative measure of changes associated with function in this case memory.”

The investigators explained that MRE gives a better indication of the microstructure of the hippocampus the structural integrity of the entire tissue. And it does this by basically “bouncing” the organ, very gently, and measuring how it responds.

MRE is often described as being similar to a drop of water hitting a still pond to create the ripples that move out in all directions. A pillow under the subject’s head generates harmless pulses, known as shear waves, that travel through the hippocampus. MRE instruments measure how the pulsed waves change as they move through the brain and those changes give an extremely accurate measure and a color-coded picture of the consistency of the tissue: soft, hard and stiff, or firm with some bounce or elasticity.

The healthy hippocampus is like a firm pillow that quickly bounces back into shape after you press your finger into it as opposed to a mushy pillow that would retain your finger mark and not rebound to its original shape.

The researchers studied 51 healthy adults: 25 men and 26 women ages 18-35. They measured the participants’ performance on a memory test as well as their aerobic fitness levels, and used MRE to measure the elasticity of the hippocampus.

Said Barbey, “MRE turned out to be a fantastic tool that enabled us to demonstrate the importance of the hippocampus in healthy young adults and the positive effect of fitness. We are excited about using MRE to look at other brain structures.”

“And, of course, if these results are more widely disseminated,” Barbey concludes, “they could certainly serve as tremendous motivation for people concerned about getting forgetful as they age, to get moving and try to stay fit.”