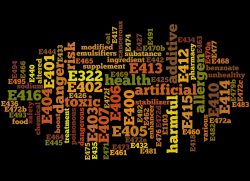 Emulsifiers which are common ingredients found in a variety of foods have come under scrutiny for their negative impact on health. Manufacturers use emulsifiers which are chemicals to extend the shelf life of certain foods and to alter a food’s texture. They have generated quite a bit of attention lately, and studies in mice have shown they can produce both behavioral and physiological changes.

Previous studies have shown that emulsifiers have the ability to alter the microbiome of mice which causes low grade inflammation and the increased risk of metabolic disorders and obesity. A study in humans also concluded that gut bacteria are directly impacted by these common food additives which subsequently leads to intestinal inflammation.

A group of researchers at Georgia State University in Atlanta took these findings to a new level. They set out to investigate whether two of the most common emulsifiers, carboxymethylcelluose (CMC) and polysorbate-80 (P80) might also have an influence on mental well being.

Scientists have shown that there is a clear, two way connection between the gut and the brain. Gut health and the health of gut bacteria have a significant influence on mental health. A study from 2011 discovered that treating mice with Lactobacillus rhamnosus which is a type of good bacteria, led to measurable changes in the brain and reduced anxiety related behaviors.

Another study conducted on mice that had no gut bacteria, showed higher levels of anxiety type behaviors when compared with controls. A recent study showed that mice given antibiotics early in life significantly alter the microbiome, social behavior and anxiety levels in the mice long term.

The most recent study using CMC and P80 investigated whether these two emulsifiers might alter the mental state of the mice. The researchers added CMC and P80 to the drinking water of the mice for a period of 12 weeks. They then measured their behavior, any changes in their microbiome and a variety of physiological parameters. They found that the emulsifiers effects on general systemic inflammation could be extended to the brain and also to behavior.

Interestingly, they found that the two emulsifiers did impact gut bacteria but in different ways between female and male mice. And they showed the changes in behavior were also different between the two sexes.

They saw an increase in anxious behavior more prominently in the male mice. In the female mice there was reduced social behavior. It is somewhat of a mystery why the differences occur, however the scientists know there are certain differences in the way the female and male immune systems work so this might offer some answers.

The next step for the researchers is to move from the mouse model to larger animals. How the results in mice are relevant to humans is inherently difficult particularly with behavioral disorders. In recent years it has been observed that there is a rise in anxiety in Western society. At the same time, there has been a marked increase in inflammatory bowel disease which leads researchers wondering if food additives might be playing a role in these shifts.

The scientists are now investigating the mechanisms behind dietary emulsifiers impacting the intestinal microbiota in addition to the relevance to humans. Science does show that our microbiome play a significant part in our health and there is a very strong need to assess food additives on food safety.