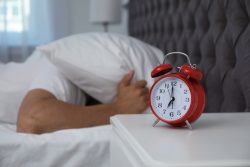 Results from a new study have suggested that social jet lag may play an important role in circadian markers for health outcomes. Social jet lag occurs when a person goes to bed and wakes up later on weekends than they normally do during the week. Findings suggest this can be associated with worse mood, poorer health and increased fatigue and sleepiness.

Like normal jet lag, social jet lag is a consequence of our bodies being forced between two time zones. One is dictated by work and our social obligations, the other by our circadian clock. Like anyone who has experienced jet lag, social jet lag leads to trouble sleeping. Our bodies take a while to adapt to a new time zone or different sleep patterns at different times during the week.

Almost all of the bodies hormones are on some sort of circadian rhythm and when they are shifting with different sleep times, the entire system will not work as efficiently as it should.

The research team at the Sleep and Health Research Program at the University of Arizona, Tucson, shows that each hour of social jet lag is associated with an 11 percent increase in the likelihood of diseases of the heart. These outcomes are independent of insomnia symptoms and sleep duration which are both related to health and social jet lag.

The study reveals how important sleep regularity, beyond the length of sleep time alone, plays a significant role in the health of a person. This suggests that sleeping at regular times may be a simple, effective and inexpensive prevention for hearth disease and other health issues.

The study involved analyzing survey responses from 984 adults aged 22 to 60 years which was provided by the community based Sleep and Healthy Activity, Diet, Environmental, and Socialization study.

Social jet lag was analyzed using the Sleep Timing Questionnaire and was figured by subtracting weekday from weekend sleep midpoint. Overall health was self reported via a standardized scale. Questions were also used to asses sleep duration, cardiovascular disease, insomnia, sleepiness and fatigue.

Another study discovered that adults with higher levels of social jet lag had a higher likelihood of being overweight or obese and suffer from metabolic syndrome compared to those who have more regular sleep patterns. This study found that just one hour of social jet lag resulted in an accumulation of about 2 additional kilograms of fat mass on average by the age of 39.

The American Academy of Sleep Medicine has recommended that adults should get 7 or more hours of sleep per night which should occur on a regular basis for promoting optimal health. In addition to the amount of time spent sleeping, healthy sleep also requires appropriate timing and regularity and good quality.