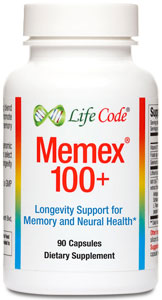 Memex® 100+ is our third generation, patent-pending nutraceutical supplement that promotes anti-aging pathways for the whole body with support for memory, thinking, and coordination.

As people age they typically respond, remember, and move slower than do younger people. Memex® 100+ has 17 active components that help reverse the decline in youthful levels of neural function, memory, and coordination as you age.

Developed by experts in the anti-aging field, Memex® 100+ was created using genetic data and biotechnology to select natural compounds which were then rigorously tested in both animal and human studies to identify a mix of substances that synergistically improved memory and neural function.

Harness the Power of Your Brain

The function of the neural system declines with age. Older people typically respond, remember, and move slower than do younger people. The question is: Can this normal neural decline with age be slowed or even stopped? At Life Code, we believe that our herbal supplement Memex® 100+ offers the potential to slow the decline in youthful levels of neural function, memory, and coordination as you age. Most of the individual components in Memex® 100+ have shown efficacy in improving human neural functions in studies published in peer reviewed journals.

The statements above have not been reviewed by the FDA. Memex® 100+ is not a preventive or treatment for any disease.

All Life CodeTM products are GMP and nutraceutical grade providing the best of science along with the balance of nature. 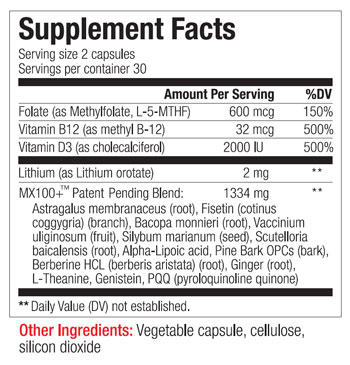 Recommended Users: Anyone from ages 22 and up could benefit from Memex® 100+. Those in their 20’s and 30’s will like the boost in endurance during sports or exercise, while older users will notice better energy, memory, and coordination.

Memex® 100+ is made using a patent-pending combination of natural ingredients. The herbal components are highly extracted natural herbs that are standardized for active components that promote neuronal function, memory, and overall brain function:

1) Astragalus membranaceus root is one of the main essential components. In traditional Chinese medicine Astragalus is considered a true tonic that can strengthen debilitated patients and increase resistance in general. Modern herbal treatments with Astragalus membranaceus root (often in concert with other herbs) are used to enhance immunity and to help in wound healing. Astragalus contains several compounds that are active on genes that we and others have identified to promote longevity and neural function. For example, mTOR (mammalian Target of Rapamycin) is inhibited by astragalus extracts. The mTOR protein is involved in autophagy (the internal system that removes denatured proteins and lipids) and mTOR inhibition is reported to extend lifespan in mice and flies. As long lived neurons are dependent on healthy levels of autophagy. Astragalus also inhibits Microtubule Star (PP2A), which is a protein phosphatase that alters tau phosphorylation levels and can affect memory and brain function. Microtubule Star is strongly linked to longevity and neuronal function in our genetic and machine learning screens.

2) Fisetin like other polyphenols such as resveratrol, is a sirtuin-activating compound and has been shown in laboratory studies to extend the life of simple organisms like yeast, worms, and flies. It has been shown to be an effective senolytic agent in wild-type mice, with effects of increased lifespan, reduced senescence markers in tissues, and reduced age-related effects. A clinical trial in the U.S. is currently underway as of October 2018 to show effectiveness in humans. In studies conducted in a laboratory, fisetin inhibits the activity of many cytokines. It has also been shown in lab studies to upregulate glutathione, an endogenous antioxidant. Fisetin also has direct activity as a reducing agent, chemically reacting with reactive oxygen species to neutralize them. Fisetin, like other flavonoids, has a planar structure, with multiple carbon rings. Fisetin is able to scavenge free radicals as a result of its electron donating capacity, which is due to the presence of two hydroxyl groups on one ring and a hydroxyl group on another ring.

3) Bacopa Monnieri has been used for centuries in Ayurvedic medicine, either alone or in combination with other herbs, as a memory and learning enhancer, sedative, and anti-epileptic. It grows in wet tropical environments, and, under its common English name of water hyssop, is a popular aquarium plant.

4) Vaccinium uliginosum has positive effects on factors TNF-alpha and prostaglandin PGE2. The herb has a history as a medicinal in Chinese traditional medicine to support a healthy pancreas, bladder, stomach and intestines. The extracts of Vaccinium uliginosum berries are highly enriched for their flavonoids (the active ingredients).

5) Silybum marianum is standardized for Silymarins, which are a complex mix of related Silibins known to promote healthy liver function. Silymarin has been shown to stimulate neurons and immunity [19,20] and is reported to slow aging of blood vessels[21]. Life Code uses a high quality proprietary S. marianum extract standardized for 95% Silymarins that generates some three times higher levels of survival in Drosophila Stress test experiments.

6) Scutelloria baicalensis also known as Chinese skullcap, has been widely used as a medicinal plant in China for thousands of years, where the preparation from its roots is called Huang-Qin. Flavones such as baicalin, wogonoside and their aglycones baicalein wogonin are the major bioactive compounds extracted from the root of S. baicalensis. These flavones have been reported to have many nutraceutical functions.

7) Alpha-Lipoic Acid regenerates other antioxidants. It is a potent reducing agent with the capacity to reduce the oxidized forms of several important antioxidants, including vitamin C, CoQ10, and glutathione. Alpha Lipoic Acid has been shown in animal models to chelate excess metals such as free iron and copper to inhibit excess accumulation. Alpha Lipoic Acid has been found to increase glutathione levels in the tissues of aged animals fed ALA. Glutathione is an important antioxidant that also plays a role in the detoxification and elimination of toxins. Studies in rodents have found that glutathione synthesis and tissue glutathione levels are significantly lower in aged animals compared to younger animals, leading to decreased ability of aged animals to respond to oxidative stress or toxin exposure. Research suggests that LA may increase glutathione synthesis in aged rats. Alpha Lipoic Acid is an essential cofactor for several mitochondrial enzyme complexes that catalyze critical reactions related to energy production and the catabolism (breakdown) of a-keto acids and amino acids Reactive oxygen species (ROS) and reactive nitrogen species (RNS) are highly reactive compounds with the potential to damage DNA, proteins, and lipids (fats). It can directly scavenge (neutralize) physiologically relevant ROS and RNS.

9) Berberine is a natural polyphenolic compound that is found in the Chinese herb Rhizoma coptidis and many other medicinal plants. Berberine is an essential component, as it interacts with neural proteins like tau and amyloid proteins and the neurotransmitter acetylcholine. These pathways are strongly linked to longevity in our genetic and machine-learning screens and to neuronal function though the current literature.

10) Ginger belongs to the family Zingiberaceae. It originated in South-East Asia and then used in many countries as a spice and condiment to add flavor to food. The rhizome of ginger has also been used in traditional herbal medicine. The health-promoting perspective of ginger is attributed to its rich phytochemistry. Jolad et al. grouped fresh ginger into two wide range categories, i.e. volatiles and non-volatiles. Volatiles include sesquiterpene and monoterpenoid hydrocarbons providing the distinct aroma and taste of ginger. On the contrary, non-volatile pungent compounds include gingerols, shogaols, paradols, and zingerone. It has anti-oxidative properties for controlling the process of aging. Generation of free radicals or reactive oxygen species (ROS) during metabolism beyond the antioxidant capacity of a biological system results in oxidative stress and in the aging process. The bioactive molecules of ginger like gingerols have shown antioxidant activity in various modules.

11) L-Theanine is a natural amino acid from Camellia sinesis that reduces mental stress and inflammation while improving cognition and protecting the brain. L-theanine alters novel longevity and neuronal genes identified in our genetic and machine-learning screens. Some of the targeted genes are trans-membrane proteins involved in the neuronal uptake of glutamate in the glutamatergic neurotransmitter signaling. Theanine is an analog of glutamine that can cross the blood-brain barrier, so it has direct effects on the brain. Among its psychoactive properties, L-Theanine is reported to reduce metal stress and improved cognition and mood via its expected binding to the GABA brain receptors in the parasympathetic nervous system. Thus L-Theanine appears to increase the overall level of the brain inhibitory transmitter GABA and is reported to promote alpha wave production in the brain. L-Theanine also affects the expression of Excitatory Amino Acid Transporters (EAATs), which are novel longevity and neuronal target genes identified in our genetic and machine-learning screens. L-Theanine also has significant affinities for the AMPA, Kainate, and NMDA receptors. The AMPA receptor is a non-NMDA trans-membrane receptor for glutamate that mediates fast synaptic transmission in the central nervous system. Kainate receptors are non-NMDA receptors that respond to the neurotransmitter glutamate, which have been implicated in inhibitory neurotransmission via promoting the release of the inhibitory neurotransmitter GABA. The NMDA receptor is a glutamate receptor and helps control memory and synaptic plasticity. L-Theanine may also have positive effects on serotonin levels. In rats, L-Theanine has been neuroprotective.

12) Genistein is a phytoestrogen isoflavone that binds the Estrogen Receptor, which ia linked to longevity and neuronal function in our genetic and machine learning screens. Genistein also down regulates beta-amyloid, glut-1 and presenilin, which help promote healthy brain function. Genistein is also reported to increase autophagy (a detox system), PPAR, and the Nrf-2 antioxidant response. All of these additional gene functions promote longevity and neural function.

13) PQQ also known as Pyrroloquinoline quinone is a small quinone molecule which has the ability to be a REDOX agent, capable of reducing oxidants (an antioxidant effect) and then being recycled by glutathione back into an active form. It appears to be quite stable as it can undergo several thousand cycles before being used up. PQQ seems to modify oxidation after binding to some proteins, and this modulatory role it plays can alter the signaling processes.

14) Lithium (as Lithium orotate) is added as an important trace mineral. Lithium promotes several genetic pathways that are important for longevity and neuronal function. For example, lithium promotes NCS-1/Frequenin that codes a calcium-binding protein involved in neurotransmitter release. Other important neural pathways affected by lithium include autophagy, tau phosphorylation, and neural transmitter breakdown by acetylcholinesterase. These are very important pathways for neural function. Lithium has been added at a very low dose, which our testing showed extended longevity while minimizing potential side effects.

15) Vitamin D3 also known as Cholecalciferol is part of a group of fat-soluble secosteroids responsible for increasing intestinal absorption of calcium, magnesium, and phosphate, and multiple other biological effects. In humans, the most important compounds in this group are vitamin D3 (also known as cholecalciferol) and vitamin D2. Vitamin D3 can be ingested from the diet or from supplements and is also produced in the skin when exposed to sunlight. Only a few foods contain vitamin D3. The major natural source of the vitamin is synthesis of cholecalciferol in the skin from cholesterol through a chemical reaction that is dependent on sun exposure (specifically UVB radiation). Dietary recommendations typically assume that all of a person’s vitamin D is taken by mouth, as sun exposure in the population is variable and recommendations about the amount of sun exposure that is safe are uncertain in view of the skin cancer risk.

Safety: The ingredients in Memex® 100+ are nutraceutical grade and have been individually tested in both animals and humans.

Warnings: The supplement is not recommended for pregnant, lactating, or hypoglycemic individuals.

45. Chakraborty, A., et al., In vitro evaluation of the cytotoxic, anti-proliferative and anti-oxidant properties of pterostilbene isolated from Pterocarpus marsupium. Toxicol In Vitro, 2010. 24(4): p. 1215-1228.

FDA Disclaimer: This product has not been approved by the FDA and is not intended to diagnose, prevent, treat, or cure any disease.