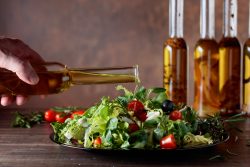 The team at the University of Minnesota Medical School researched olive oil and may have found what it is that activates the pathway to increased lifespan and health!

Previous studies into the Mediterranean Diet identified red wine as a key factor to the health benefits of this diet. Red wine contains a compound known as resveratrol which activates certain pathways in cells to assist in healthier aging. What the recent research has shown is that it is the fat in olive oil that is activating the same pathway.

According to the team, just consuming olive oil may not enough to get all of its health benefits. They suggest that when combined with limiting caloric intake, fasting, and exercising, the benefits of using olive oil are more pronounced.

They found that the way the fat in olive oil works at first is that it has to be stored in microscopic things known as lipid droplets which is how the cells in our body store fat. After the fat is then broken down during fasting or exercising, this is when signaling and the beneficial effects are realized.

The team will further their research by translating it to humans with the goal of finding alternative ways to further tailor dietary regimens that will improve health both in the short term and long term. They want to understand the biology and hopefully change the paradigm of health care from a person seeing a variety of different doctors to treat a variety of disorders. The goal is to treat aging!